A short metal wand tipped by a piece of rainbow quartz one one end and a cluster of amethysts on the other.

Despite its minuscule size relative to its owner, this twelve-inch-long wand is the most prized possession of the frost giant wizard Sorrassar. The lovely wand is made of twisted iron overlaid with spiraling gold filigree. A stunning piece of rainbow quartz dominates one end, balanced by a cluster of Amethyst, Moonstone, and Hematite at the opposite end.

The wand of cruel banishment is a vicious device, designed to rid Sorrassar of his enemies. When pointed at a target and the command word spoken, the wand emits a beam of coruscating rainbow-coloured light. The target must succeed on a Dexterity save1 (DC 15) or be instantly teleported to the location they would least like to visit (a fire giant may be teleported to the arctic, a runaway may be teleported home, a pacifist may be teleported to an active battlefield, etc.), subject to the GM’s interpretation. Once the target arrives at their destination, they must immediately make an Intelligence save1 (DC 15) or be unable to benefit from any other form of teleportation magic until the cured a remove curse or similar effect. 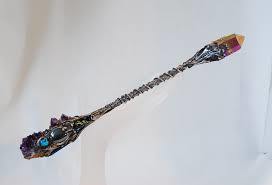