This wand is forged from solid silver, nearly as long a grown man’s forearm from elbow to fingertip, with a large piece of white quartzite crystal set into the tip. The setting for the crystaline head bears a distinct lightning bolt design. It was wielded by a Red-Plume sympathizing mage during the Battle of the Ferry. It radiates a faint aura of necromancy, enchantment, and evocation magics; and a strong aura of Evil.

The Wand of Wrath has no charges, nor command word, being powered solely by the wielder’s hate. When pointed directly at a hated enemy, the wand draws upon the wielder’s life force to unleash a devastating Lightning Bolt. A “hated enemy” in this case is any enemy against whom the wielder would normally be specifically granted a bonus to his attack rolls (such as a Ranger’s species enemy, or a Dwarf’s bonus against elves); or any enemy who has personally dealt damage to the wielder equal to 50% or more of the wielder’s total hit points.

When the wand is pointed at an enemy, the wielder must choose what level the Lightning Bolt is cast at (anything from 1st to 10th level). If the level selected is greater than the attack bonus granted by the wielder’s hatred, then he suffers an amount of damage equal to twice the difference1. This damage is dealt immediately after the lightning bolt occurs, thus always allowing the wielder to smite his foe before succumbing to the damage.

Because it feeds directly on the wearer’s racism and hatred, any use of the Wand of Wrath is generally considered an Evil act.

1 For example, if a Ranger used the wand against his species enemy, he could cast a 4th-level lightning bolt at no hit point cost to himself (having a +4 bonus against the foe). If he chose instead to cast a 6th-level lightning bolt, he would suffer 4 points of damage. Against a foe who has simply harmed the ranger, that is not of his species enemy, he would take damage equal to the total caster level (2 to 20 points of damage). 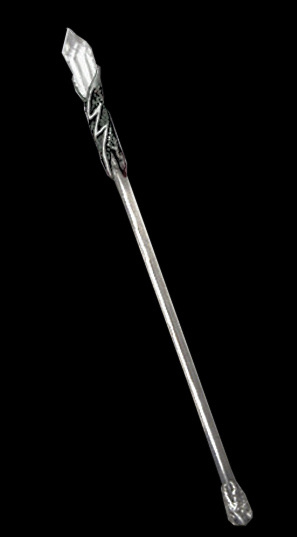