Yargrund, the Hammer of Sunset

A warhammer of twice normal size with a glowing blue head.

The old and massive hammer is, unsurprisingly, of dwarven make, but bears none of the ostentation typical of dwarven craftsmanship. Yargrund is designed like a war-hammer, having a long hook behind the striking head, almost like a pick-axe, and a long spike off the top, but the head is easily twice as big and the handle half-again as long as normal, giving it reach comparable to a longsword. The hammer is much lighter than it looks, weighing no more than an ordinary warhammer.

The hammer was forged by the Griff Clan, a large group of dwarves who dwell in the Dragonspine and Galena Mountains near the Moonsea, during the time of the great Tharian empire. While few remember it’s true history, the nature of its powers lead many scholars to believe that it was forged as a gift for a non-dwarven warrior, perhaps even one of the Kur-Tharsu, with a particular dislike of the undead.

If wielded by a living creature, Yargrund deals damage as a +2 magical Lucern Hammer and can be wielded in one hand without penalty. When held in hand, Yargrund constantly sheds a bright, blue light out to a distance of forty feet. In addition, while held in hand, the wielder of Yargrund can speak and understand the dwarven language as if he were a native speaker (Yargrund grants no capacity to understand written dwarven).

If held by an undead creature, Yargrund exhibits none of its special properties. It deals damage as a non-magical warhammer, does not shed light, weighs four-times as much as a normal warhammer, and is treated as a large weapon for determining how many hands the creature needs to wield it.

Yargrund, the Hammer of Sunset 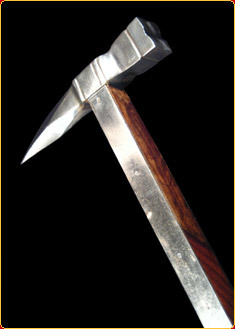