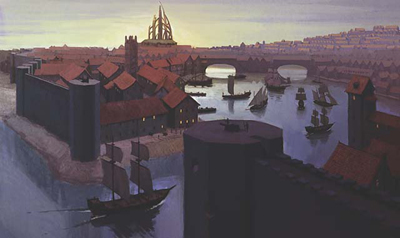 Hillsfar is a powerful city-state led by the Maalthiir. Located on the southern coast of the Moonsea, the city is heavily involved with trade in the region, acting as a hub for cities and settlements in the surrounding area. A person from Hillsfar is known as a Hillfarran.

Hillsfar, formerly the most open city on the Moonsea, has changed markedly in outlook, a change directly linked to the disappearance of the elves. Formerly the meeting ground between the elves and humankind for trade and diplomatic dealings, Hillsfar is today an ambitious, well-armed city-state, challenging Zhentil Keep for economic supremacy in the region, and now visibly ready to meet any resultant military threat.

Hillsfar was until recently ruled by a council (overthrown three decades back) of humans, half-elves, and representatives of the Elven Court. The city is now governed by The Maalthiir, a trio of shrewd, ruthless, and independent merchant-sorceresses. Rumor has it that they have plans to annex Elventree and the other nearby cities, and spread their influence down the coast, eventually opening a port on the Inner Sea. The Maalthir’s mercenary guards, nicknamed the .Red Plumes,. have a squad in Scardale and others patrolling through the remains of Cormanthor, south towards Essembra. The Maalthiir have assured Sembian envoys that they intend to merely protect these routes for merchant traffic in the wake of the Time of Troubles.

The new government of The Maalthiir is expansionist in nature, but has been held in check by the actions of Zhentil Keep. Red Plume and Zhentilar forces have regularly clashed along their common border, particularly in the now-ruined city of Yûlash.

There are three major temples in the Hillsfar. The most powerful is the Vault of Swords, a complex dedicated to Tempus. Its Most Holy General Dounalis Guff is the official chaplain of the Red Plumes as well. The House of Happiness, the temple of Lliira, is very popular among the people, and overseen by Barand Hithkin. The Lastholme, a small temple of Chauntea, is controlled by High Priest Borm Hlast. There are also large public shrines to Umberlee, Malar, and Torm.

Hillsfar is noted for three other features. First, The Maalthiir operate and encourage the use of the Hillsfar Arena, a site of gladiatorial games. It is also used for the disposal of those unpopular with the established regime. Second, the city is the site of one of the few honest-to-goodness magic shops in the Realms, the Magic and Curios Shop of Hillsfar (Laris, proprietor). Laris is a short-tempered, rude man who is well aware that his customers need him more than he needs them and is willing to part with a few minor magical items. Two stone golems enforce his prices.

The third feature, and the most dangerous from the standpoint of nonhuman adventurers, is the fact that The Maalthiir are extremely humanocentric and xenophobic. Elves, dwarves, halflings, and even half-breeds are banned from the city, and if found there will be put into the arena for a spectacle (say, unarmed combat with a minotaur). Atrocities involving Red Plumes and non-human areas are now legendary, and Red Plumes are hated throughout the Moonsea area by non-humans, regardless of alignment. Those non-humans who remain in Hillsfar are kept as slaves, roam the city-streets under cover of darkness hoping to avoid the eyes of the Red Plumes, or else are passing through, hoping to reach the docks and leave as quickly as possible.

Hillsfar therefore holds great opportunities and great dangers for the adventurer, the worst danger being running afoul of the Maalthiir and their stooges. The Maalthiir have been shown to be skilled and capable in ruling their city-state from Castle Vultureroost, and did not succeed by underestimating their potential foes.

Although the city of Hillsfar is ruled by the iron fist of the Maalthiir, there are two standing great laws.

There are numerous minor laws and decrees that have been passed by the Maalthir, but the laws of Hillsfar allow only one form of punishment, regardless of the crime—trial by combat in the Hillsfar Arena. Public drunkenness, theft, assault, violating a curfew—All of these will land the ne’er-do-well in a fight (not necessarily to the death) against a trained gladiator, fellow criminal, or monster of some kind.

Some current, unusual laws of note to adventurers include:

Although trade in the Moonsea is typically carried out through rivalries and competition, almost all the goods of the region pass through Hillsfar in the hands of middlemen and intermediary merchants.