While the ruins of Old Phlan hold many challenges and treasures for would-be adventurers, the threats facing New Phlan and the opportunities for gain are by no means limited to the those within the walls of the ancient city. With a good 50 miles between Phlan and the next nearest major settlement (Melvaunt), the area around Phlan is largely empty wilderness, teaming with monsters, ruins, and places to explore.

There are five major divisions in the lands surrounding New Phlan. Stretching north from Phlan to its headwaters in the Dragonspine Mountains is the Stojanow River (now called the Barren River). To the west of the Stojanow valley lies the Grass Sea, a great empty plain running north to the foothills of the Dragonspine Mountains, and west all the way to Zhentil Keep. North of the Grass Sea are the Dragonspines, which separate the Moonsea region from The Ride. Along the east bank of the Stojanow lies the seemingly indestructable Quivering Forest. East of the forest, stretching from the shore of the Moonsea in the south north all the way into Thar, lies the Twilight Marsh (also called the Glumpen Swamp by the people of Thar). Each of these areas will be discussed in greater detail below, and may be expanded upon as reports come back from the various adventuring companies exploring them. 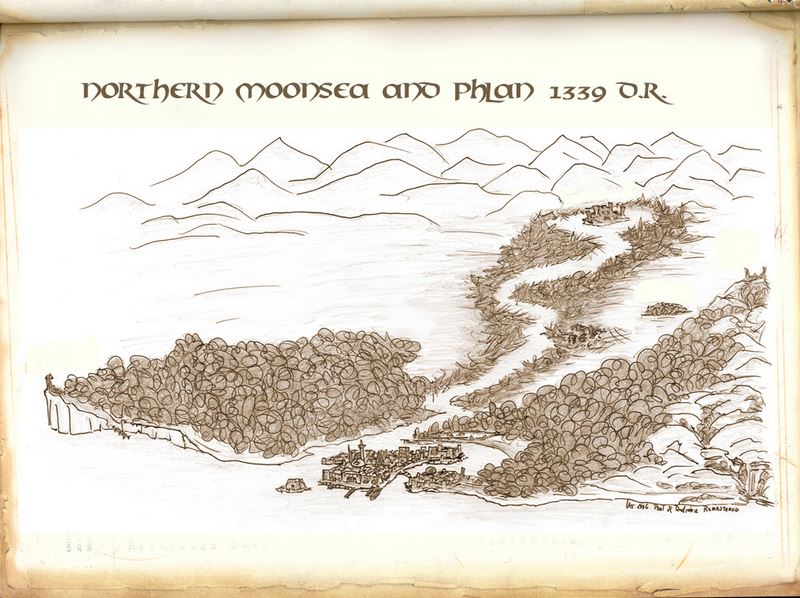 The Stojanow River is the main reason for Phlan’s existence. The river has its headwaters in the Dragonspine Mountains in the Valley of Thorns, which is sometimes called Dragonden Pass, and flows south to empty into the Moonsea at the Bay of Phlan. The river was originally called the Stojanow, a dwarvish word meaning ‘Trade Route’ for it was down this passage the ore-laden barges floated from the Dragonspines, bound for the south, but is now referred to as the Barren River by most people of the Moonsea.

Just north of Phlan, in the midst of the Quivering Forest, the Barren River widens to form Lake Kuto, in the center of which sits Sorcerer’s Island. The island takes its name from the long string of wizards who have made it their home, starting with the Arch-lich Zanaksr, the great wizard Rimon, and later an evil sorcerer named Yarash. It is not known if the island is currently inhabited and no one has traveled there in a generation.

The waters of the river north of Lake Kuto run clean and wholesome down from the Dragonspines, and the lands bordering the northern half of the river are exceptionally rich, though they are largely covered by the Quivering Forest in present days. The Valley of Thorns at the headwaters of the Stojanow is home to the small village of Varawa, is famed for its rich harvests, harsh winters, and heavy seasonal floods.

The waters of the river south of Lake Kuto are a foul-smelling, gray sludge. Even with its swift flow, the dark murk of the Barren River never breaks. Strange creatures are often seen coming from the river, ranging from giant amphibians, to three-eyed fish, to many-armed, vaguely humanoids, reptilian monstrosities. Only the bravest and most iron-stomached oarsmen dare to ferry goods or people up and down the river these days.

Originally planted by the elves of Cormanthor, this copse was mildly enchanted, hastening the growing season to produce a great woods in the span of a human generation. Though the woods have been felled on a number of occasions—lumbered, clear-cut, or even burned by dragonfire—it has always returned to its original form, becoming a light woods within two years, and a deep shadow-filled forest by the end of a man’s life. Dark shadows lurk between the massive trunks of the trees in the Quivering Forest, and every attempt to clear a permanent path through that growth has resulted in the deaths of those involved.

Despite its seemingly indestructible nature, settlers continue to build their homes within the forest, drawn by the supernaturally rich soil and the promise of unlimited building supplies. Likewise, many remains of older farms and settlements can be found in the forest, as well as an abundance of menhirs and standing stones from the druidic sects that once called the forest home. Rumors abound that the forest is still guarded by an ancient hierophant. The Quivering Forest is also said to be home to giant spiders, ettercaps, mischievous fey, animate plants, and a dark necromancer or three. Such rumors do little to discourage the hearty people of Phlan from carving out their homesteads.

Located west of the Moonsea, the Dragonspine Mountains are home to red and white dragons in the higher peaks, and giants and monsters in the lower altitudes. Zhentil Keep, Melvaunt, and Hillsfar all mine the range, and the infamous Citadel of the Raven stands on the western slopes. The dragons of this range avoid the Citadel of the Raven, but they freely go elsewhere in the mountains. Fiercely independent, as most dragons are, they have lairs on peaks and small territories that they defend.

In ages past the Dragonspines were home to a great nation of dwarves, but the stout folk have largely been driven out by raiding giants and hordes of goblinoids. Today the dwarves are mostly limited to the far-western reaches of the range, where the Zhentarim from the Citadel of the Raven and Zhentil Keep are able to keep the humanoids at bay. The dwarves keep up a brisk trade with the Zhents, but have not had much interaction with Phlan since its fall 300 years ago.

The Dragonspines are home to some geologic upheaval. There are two active volcanoes in the range, said to be home to both dragons and fire giants, and weak earthquakes and tremors cause rockslides fairly regularly. In addition, many tales speak of strange magics in the Dragonspine Mountains—magical pools, ancient ruins, and even portals to other planes in the highest peaks.

This vast stretch of grassland, some hundred miles in width, is largely uninhabited, but relatively safe. No roads cross this prairie, and those settlers who make their homes in the Grass Sea are generally those that prefer solitude—though as more and more people from Phlan move out into the fertile grasslands, such solitude may not hold for long. Packs of yellow-striped prairie-tigers or wild boar occasionally attack travelers, but humanoid threats are kept suppressed by regular patrols from Zhentil Keep (though the Zhent patrols are themselves a threat to travelers who lack the proper papers and bribes).

Only three settlements of note exist in the Grass Sea. The first is a village of Thri-Kreen. These insect people keep to themselves, avoiding conflict with the Zhents at all cost. Their hunting parties can often be seen crossing the plains, but tend to leave humans alone.

The second is a small, walled village of pirates, buccaneers, and other criminals on Stormy Bay in the Moonsea. The pirates are often harried by the navies of Zhentil Keep, Mulmaster, and Hillsfar, and thus keep their privations to the northern shore of the Moonsea. Visitors to Stormy Bay are common, mostly due to the brisk slave trade kept up by the pirates.

The last settlement is a Zhent outpost, roughly twenty leagues west of Phlan, midway to Zhentil Keep itself. This fortified military outpost has operated for several decades, guarding the northern and western passages to Zhentil Keep. Patrols from the outpost provide advance warning about adventurers and other “ruffians” making their way to the keep, and occasionally come to the aid of human settlers traveling the Grass Sea.

In the past this stretch of marsh bordering the Trask River between Phlan and Melvaunt has been home to evil liches, plagues of undead, bandit gangs, and monsters of all stripes. The major roads connecting Phlan, Melvaunt, and Glister all pass through the Twilight Marsh at some point and treks through the swamp are generally considered the most dangerous leg of any journey between the cities, with caravans reporting brutal attacks by lizard men on catoblepas mounts, yuan-ti, gargantuan bullywugs, and will-o-the-wisps. There have even been confirmed sightings of a huge black dragon skulking through the marsh.

The marsh has spread its boundaries slowly over the years as vegetation from the Quivering Forest met with the seasonal floods of the Stojanow and Trask rivers. Several old keeps, castles, and manor houses stand flooded in the marsh, with only their spires and battlements jutting above the fetid waters. Long abandoned by their owners, these sunken dwellings are often warded by powerful, lingering magics and the fell beasts of the swamp.

Aside from the monsters roaming the area, few other creatures make the Twilight Marsh their home. The occasional bandit group or crazed hermit can still be found hiding out in the marsh, and it is known that a large, mostly peaceful tribe of Lizard Men dwell in the northern reaches of the marsh, in the area known as a the Glumpen Swamp. On the far side of the marsh, at the intersection of the roads coming into Phlan from Melvaunt and Glister, sits Iniarv’s Tower, a remote temple of Helm commanded by the paladin Sir Justin Melenikus, that serves to keep watch on the roads and offer healing to travelers beset by swamp monsters.